Get all cheesy with your lover, or mourn about being a 单身狗dānshēngǒu. Whichever way you celebrate 情人节Qíngrén jié, our romantic words & phrases in Chinese are here to help. No guarantees all this smooth-talking will get you anywhere, but at least your Mandarin will be correct. Learn them from the cards beneath.

How to say “Anything can expire, but liking you can’t.” in Chinese?

Another cheesy but popular line in Mandarin: “There’s something on your face. A little prettiness.”

How about this Chinese line? “365 days a year, I only love you for three days: yesterday, today, tomorrow”

This is a more local one in China: “I like you for more than 2 minutes and cannot go back.” This is a reference to WeChat messages, that cannot be withdrawn after two minutes of being sent.

This is the best of the worst lines in Chinese: “There’s something on your face. A little prettiness.”

Or this Mandarin phrase? “I want to become a certain person after seeing you: your man/girl.” 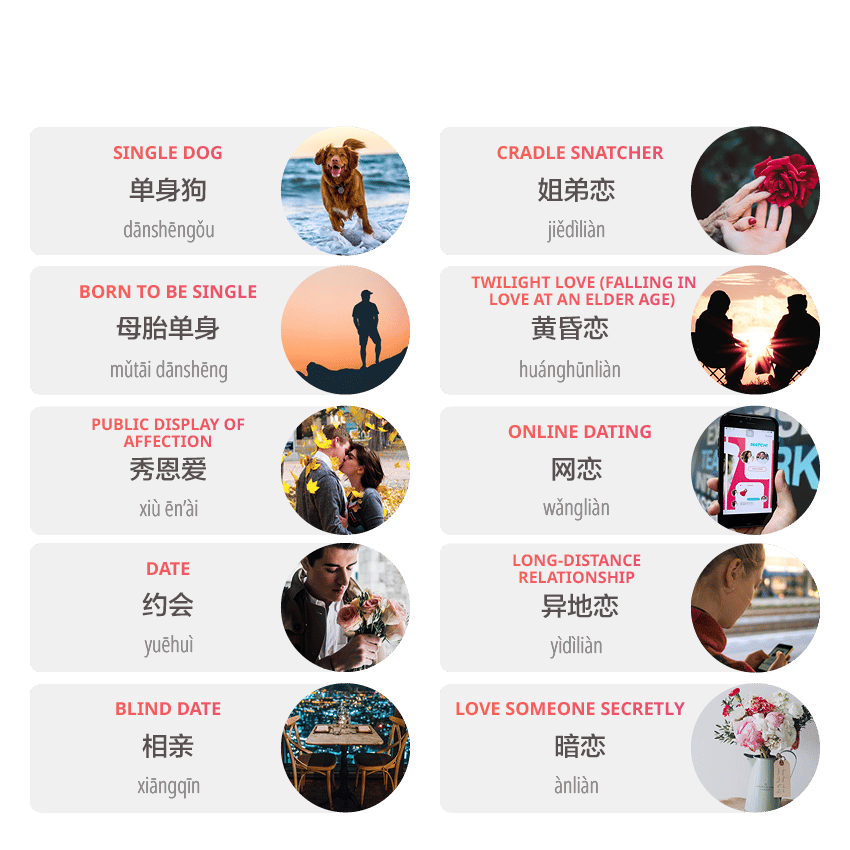 The story of Chinese Valentine’s Day

The first time I learned about “七夕” I was 8 years old. I still remember it was a clear summer evening. I was sitting next to my grandma in our backyard. She was waving her hand made wheat-straw fan. Frogs croaked openly over the silence of the village, and I had just finished reading the little mermaid. I loved the sad ending but it depressed me a little. I tried sharing the story with Nainai. I told her: “I want to be a girl like a little mermaid, but I won’t run into a prince like that.”

“你知道今天是什么日子吗”(Do you know what day is it today?) she asked. I shook my head. She pointed at the clear sky and asked if I could see the milky way. I nodded but I was still confused. Nainai began to tell me a story.

“Can you see the two stars next to the milky way? The two bright ones. They are not real stars; they are lovers, the girl is named 织女 (the weaver girl)，the boy is named 牛郎 ( the cowherd boy)。”

“一天, he passed through a little forest. It was the first time he ever heard such sweet voice.”
— Nainai
“很久很久以前 (long long ago, all Nainai’s stories started this way), there was an orphan in the village. He grew up on the mercy of the neighbours, but he was smart and diligent. At 14 , he became handsome. He was also the best cowherd in the village, so people called him 牛郎. He owned a willing ox, which his parents gave him. He ate, slept and played with the cow. The cow was a friend. ”

“一天(one day), he passed through a little forest. It was the first time he ever heard such sweet voice. He followed the voice and saw the prettiest girl he had ever seen. She was taking a shower in the lake. 牛郎一见钟情(love at the first sight), and couldn’t move at all.”

“What? The ox can talk?” I didn’t understand.

“Yes, the ox turned out to be the king of oxen. He was moved by 牛郎’s feelings and wanted to help. He told 牛郎 ‘The girl is the daughter of the Jade Emperor and the Holy Queen in heaven. She’s very good at weaving. She is the one who makes all the roseate clouds, thus she is called 织女. Take her dress and leave for home. Don’t stop. She will follow and be your wife.”

“牛郎 did what the ox said. 织女 couldn’t go back to the heaven without her dress. She stayed in the secular world and got to know what a great person 牛郎 was. 他们相爱了(they fell in love)。They lived happily together for seven years.”

“Kill me and take my skin. It shall help you fly to Heaven.’”
— The Ox
“However, seven years on the earth equals one day in the heaven. In the evening of that day in heaven, the Holy queen found out what her missing daughter did. It brought shame to the family. How could a goddess like 织女 married a man from the secular world? She was furious and commanded the holy general to take 织女 back.

“织女 begged and begged, but the general was heartless. 牛郎 tried to fight, but how could he beat a general from heaven? 织女 was separated from her beloved husband and kids. 牛郎 didn’t give up. He was determined to save his wife, and planned to go to Heaven even though no mortal man had never been there. ‘Kill me and take my skin. It shall help you fly to Heaven.’ 牛郎 did what the ox told him again, but this time in tears. The ox said, ‘don’t cry for me, my boy, I am too old.’ The skin magically allowed him to fly and approach his beloved wife. Before the could finally meet, the Holy Queen took off her hairpin and drew the Milky Way between them. 牛郎 couldn’t get over!”

“But 牛郎 was so determined to be with his wife that he refused to leave and decided to stay there forever. Their love moved the holy spirit and they are allowed to meet each other once a year. On that day, all the magpies gather over the Milky Way and form a bridge for them. They finally can hold each other in their arms and tell how much they miss and love each other.

“My darling, today is the day, the seventh of the seventh month of our lunar calendar. It’s the day for true lovers. Listen carefully, you might hear them talking now.” Nainai looked at me, smiling, waving her wheat-straw fan gently. It was very quiet; I didn’t even notice the frogs had stopped croaking.

“Nainai, I would prefer a sincere cowherd to an ignorant prince. ”

I later found that most of my girlfriends shared similar feelings. We saw the fight for the love of freedom and the insignificance of social classes, but we were told to marry a man from a similar background.

Looking back to that day, I got to know love is always going to be a bitter-sweet thing, and you have to fight for freedom. Most importantly, lovers can’t give up on each other.