Many university students around the world spend some time experiencing life in another country, whether for a semester abroad or a gap year. For Chinese students, study abroad isn’t just an eye-opening experience that you fondly reminisce about in your middle age. Studying abroad is a necessary means to get a better job, income, and life for you and your family. 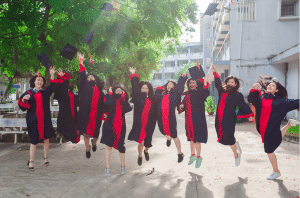 Most Chinese university students aren’t just doing a semester abroad but applying to a full 4-year degree program in Europe or North America. While the experience of studying in another language and with students from a different culture provides them with valuable experience and a competitive advantage on their resume, attending an expensive foreign university is also a status symbol. The increased interest in foreign travel and studies coincides with China’s exponential economic growth which provides families with disposable income and the means to send their children to the fanciest and most expensive schools in the world.

In addition to the prestige of studying at a foreign university, applying to schools in Europe and North American relieves Chinese students of the pressure from the gaokao or Chinese college entrance exams. While Chinese universities base admission on test scores alone, many foreign universities also look at other criteria such as grades, extra curricular activities, and essays. Instead of competing with their peers for limited admission spots at China’s elite C9 universities, they can choose from dozens of qualified universities around the world.

Studying abroad provides millions of Chinese students with a global perspective and a competitive advantage in the job market. Although as more and more Chinese students end up at foreign schools, the distinction starts to lose its edge and become an expectation rather than a privilege.

Why does “drink vinegar” mean “jealous” in Chinese? Save more, buy more, on Lucky Double 11 Day

How to learn Chinese in a month

The meaning of “PK” in Chinese