Jane on starting a Chinese school in Shanghai

Jane Luo is one of three co-founders of GoEast Language Center. She reflected on the importance of community for teachers and students at this Mandarin school in Shanghai, and the challenges of bringing GoEast to North America, and her hopes for continued growth and success. Jane Luo, GoEast Co-Founder and General Manager of North America, has a Master of Arts from Fudan University in Chinese Linguistics. 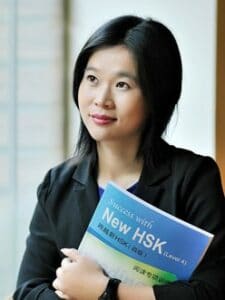 Six years after co-founding a company, Jane Luo is still doing what she dreamed of during her graduate and undergraduate studies in applied linguistics: teaching. “The problem was,” she says, after graduation, “there weren’t many good opportunities.” Her first job out of school was at a large corporation, organizing events, team building activities, and writing articles. The work itself wasn’t so bad but what bothered Jane was the company culture. At such a large company it was difficult to find her place and recognize her own contribution.

After one year, Jane quit her corporate job. Around the same time, she met Emily Wang, future Co-founder of GoEast. “She was really enthusiastic [and] made me feel like I can go back to the road I wanted,” a career teaching Chinese language. It didn’t take long for Jane, Emily and Maria to come together and create their own career paths founding GoEast Language Center, a Mandarin school in Shanghai.

“You are a part of GoEast.”

Starting a business with just 3 people provides a stark contrast to the corporate culture of a large company. From the start, every task, every responsibility, was completed by one of the three co-founders. At the same time, launching a small company gave Jane the influence she lacked at her first job. She made sure the culture of GoEast was clearly defined from day one: “We tried to make people feel really comfortable at this school.” Creating a strong sense of community among both the teachers and the students was a priority. In addition to founding GoEast, Jane gave birth to a baby girl just before the company launched. Her daughter became part of the community, with the co-founders as her aunties. In her role as a new mother, with a school as a second child, Jane had the support of teachers and students alike in raising her daughter, one large extended global family. Even now, as GoEast grows internationally, Jane wants everyone to feel like they are a part of the community, “[we] welcome people from all over the world.”

“It’s a good opportunity for both of us.”

Jane’s favorite part of GoEast is getting new students. She enjoys teaching them about Chinese language and culture but also enjoys the opportunity to meet a variety of people at the school. From a business perspective, enrolling new students is a sign of the school’s success. Yet Jane also sees the benefits for the students. “We have more students and they have a good chance to explore Chinese culture and language,” she says. Just as it’s important for the community of teachers to support each other, solving challenges they face in the classroom together, the international community of students also support and encourage each other outside of the classroom, answering each other’s questions and sharing experiences as they learn the Chinese language.

GoEast has seen steady growth throughout its first 8 years, starting slow and expanding only when stable. “The first three years, we were building the foundation of the school,” says Jane. Since then, student enrollment has been doubling or tripling each year. While their physical headquarters are in Shanghai, GoEast has teachers and students all over the world participating in both face-to-face classes and online classes. Jane, herself, is one of the GoEast teachers abroad, providing online lessons and, hopefully, a physical outpost of GoEast Mandarin in the USA.

“It doesn’t mean that I’ve given up.”

A year and a half ago, Jane and her family moved to North Carolina from Shanghai. Based on GoEast’s successful collaboration with local schools such as Fudan University, Jane planned to connect with American schools in the Triangle area. Breaking through the administration of the schools proved more difficult than expected. “It doesn’t mean that I’ve given up,” says Jane, “I’m still trying to find some opportunities to work with them.” In true entrepreneur fashion, she is adapting her plans and pivoting her focus, looking instead for collaboration with student-run organizations.

“I never thought I’d do something related to business.”

Jane considers herself a teacher, primarily, but has learned a lot about running a business through her experience at GoEast. In school, she was singly focused on her passion of linguistics. Now, she admits that she wished she had paid attention to other topics, especially business although she has been able to learn enough on the job. “I read a lot of business cases, [about] how companies grow,” says Jane. “There are so many startup companies, they grow so fast in China.” She takes inspiration from reading about Chinese companies like MoBike, Didi, and education startups. Many of these companies have experienced explosive growth, a very different trajectory than GoEast, but Jane stays positive about their own growth: “We are still small, that means we have the opportunity to be that good.”

“We really made the right decision.”

Jane’s move to the USA has been a challenge, especially being physically far away from the GoEast community. “Sometimes when you are working by yourself, you don’t have the [communal] environment. It’s really easy to get distracted.” Yet just as her lack of business knowledge didn’t prevent her from starting a business, Jane chooses to see the opportunity in her new location. “I’m doing less than before,” she says, “[but] I really hope to have a school here.” She has already done the market research and has found people who are interested in Chinese lessons. Next, she wants to “…set up a small school, a studio here that’s part of GoEast,” a place where she can extend the community of GoEast and share Chinese culture and language with Americans. Jane is embracing her role as a teacher and entrepreneur, setting an example for her daughter and everyone at GoEast: “I hope my daughter will be proud of her mom and GoEast because we are doing great things here.”