Cat on learning Chinese in Shanghai

Why did you come to China and Shanghai?

I came to China in January 2018 because I really wanted to explore a big city. I’m from a really small town of 700 people. I just wanted to experience it. I heard really good things about China, so I was like, yeah, let’s go! So I just hopped on a plane and came on over and it’s been really good ever since. 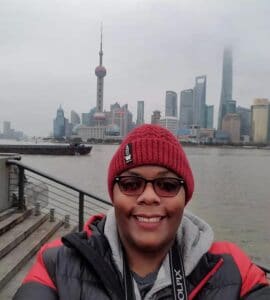 Did you know any Chinese language before you arrived?

Why did you start taking Chinese language classes at GoEast?

My friend who went to GoEast, Ben, he said I should really try out this school. I was thinking about just doing some elementary stuff cause I live here and I was surrounded by Chinese people all around me. So I’m like, “I need to pick up some things. It’s about time.” This was after six months of me being here. I did not think that I’d be able to grasp any of it. But I got into class, I had a really great teacher and it started out really really well. I caught on pretty good with the tones and vocabulary. And of course, I had lots of local colleagues that helped me practice. [Cat works in Shanghai teaching English to young children.]

Anytime I have my books open they’re like, “Oh! You’re studying Chinese!” They’re so happy, so excited that I’m trying, even if it’s just a couple of phrases or I’m working on the tone of something. They will always help me and repeat it with me. So it’s really great.

Is it ever embarrassing to practice Chinese with colleagues who are native speakers?

Oh yeah. I feel like I would be even further in the course if I could have the confidence to talk more with my colleagues. I just feel like I’m not at their level or ever will be and so I just shouldn’t even try. So I just feel really shy and just scared of saying something really bad. But anytime I do say something, they’re always really receptive of it so it’s ok. But still, it’s like this barrier that I haven’t been able to break yet.

Do you have any tools or techniques for studying Chinese?

Yeah, a big one: music. I love music and I’m constantly listening to Chinese music, on the metro, walking to work, all the time. So right now I’ve been listening to more Chinese hip hop. I also listen to Chinese covers of a lot of popular Disney songs, which, you already know the lyrics, you know the tune and how it’s gonna go, so now you can practice following along with what they’re saying. I just look them up on YouTube or QQ cause a lot of times they have the pinyin so I can practice reading too.

What’s been the most surprising thing about living in China?

I really did not have many expectations. I was really open to it cause it was the first place I had really traveled to. The most surprising thing? How open everyone is to me. I didn’t expect that being a foreigner, looking so different than they do. A lot of people are happy to see me, “Oh hello!” Overall they’re very happy people, they’re very nice, welcoming. Whether it was in a store, in a shop, in a cinema, in my school, they’re very welcoming to people.

What advice do you have for people who are just starting or considering learning Chinese?

Do it, man. Dive in headfirst. It’s gonna seem like something you could never do. Why would you ever do it? But once you get in there and you start realizing that you have the ability, if you have good people around you that can help you, that you have a good environment, why not take the chance if you have the opportunity?