How can you learn to type Chinese without an alphabet?

Chinese language doesn’t have an alphabet. There are no letters that make up written words, only lines which together form a character, a sort of pictogram representing a word. So without letters, how can someone type words in Chinese? Fortunately, in 1949, Chinese language started using a roman alphabet system to represent the sounds of standard Mandarin. This system is called pinyin. The pinyin system helps people learning the language visualize the pronunciation. It also allows you to type Chinese characters on computers and phones.

In order to type in Chinese on a computer, you will need to install a “language pack”, which sets up a second language keyboard. This will let you type in another language with spell check, accent marks, and special symbols. Usually there is a keyboard short cut that involves the space bar, shift key, or caps lock key to change between the different language keyboards. This is the basic set up.

Typing in Chinese on a computer is like magic. Type the pinyin for the word and suggested characters will appear on the screen. Type the space bar to select the first option and use the number keys to select any other option. You can type one character at a time or whole sentences. For example, if you want to type “hello”, you would type n i h a o then the space bar to select 你好. If you are using the Chinese keyboard and just want to select the letters you typed, not a character, press the Enter key.

On a smart phone, there are many options for writing in Chinese. Writing using pinyin is similar to a computer except that you have the option to use either a full 26 letter keyboard or a 9-button keyboard, similar to old phones. The biggest difference with a smart phone’s Chinese input is that you can draw a character. When you use this keyboard, there is a blank space for you to draw the strokes and the suggested characters appear above for you to select. This is an especially useful feature when you see a character that you don’t recognize and want to look it up but don’t know the pinyin. 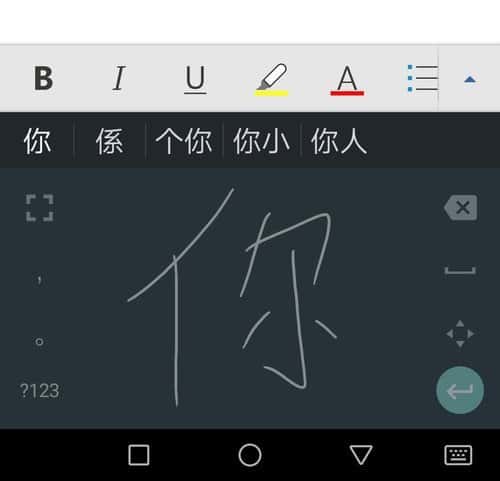 Learning Chinese VS learning to code: Is it different, similar?