How to say ‘Chinese language’ in Mandarin Chinese?

Here are some tips to help you name the Chinese language in Chinese on different occasions or to different people.

“汉语” (hànyǔ) literally means “the language of Han people (the largest ethnic group in China)”. It refers to the language itself from a linguistic perspective, so a “汉语书” (hànyǔ shū) means a book that help you learn Chinese, ie. a textbook. This name is usually used by language teachers or when people are talking about studying Chinese language.

“中文” (zhōngwén) literally means “the written language of China” , thus a “中文书” (zhōngwén shū) means a book written in Chinese, which could be a novel or a play, etc. The usage of this name is broader now, not only limited to written, but also spoken Chinese. People who are not involved in language teaching prefer to use “中文” (zhōngwén) more than “汉语” (hànyǔ). Now you probably understand people on the street better.

So both hànyǔ 汉语 and zhōngwén 中文 mean “Chinese language”. Many students understand 中文 as “written Chinese,” and 汉语 as “spoken Chinese.” Is this correct? Not really! In modern Chinese, 中文 and 汉语 have the same meaning and, in most situations, are interchangeable. 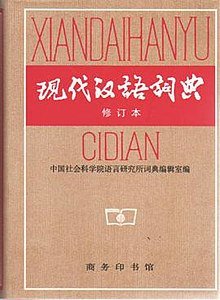 When referring to the written language, use 中文:

When referring to the spoken language, the two terms are interchangeable.

Modern Chinese dictionary 现代汉语字典 Xiàndài hànyǔ zìdiǎnDictionaries often relate to the entire language, both spoken and written, including pronunciation. To keep it simple, all dictionaries use “汉语”.

Putonghua for the accent

“普通话”(pútōng huà) is translated as “common language” or “Mandarin”, which is a concept corresponding to “dialects” (There are 129 dialects in China. )  “普通话”(pútōng huà) is based on the pronunciation of Beijing Dialect and it’s the language you and every Chinese kid are learning now. People who are from places with a strong sense of dialects would probably choose this word when they praise your spoken Chinese.

‘Zhongguo hua’ for a name

“中国话”(zhōngguó huà) emphasizes “中国” (zhōngguó) as a country, “the speech of China”, it’s used in Japanese and Korean as well. This word is used in very casual occasions, such as when a cab driver is chatting with you.

“国语”(guóyǔ) is another way of saying “普通话”(pútōng huà) in Taiwan. Guóyǔ 国语 literally means national language and refers to Taiwanese Mandarin, which is a dialect of Chinese and the official language of Taiwan. It is also based on the phonology of Beijing dialect. However, 国语 has some notable differences in vocabulary, grammar and pronunciation with Standard Mandarin and for Chinese characters, they still use traditional characters in Taiwan.

Other names are ‘Huayu’ and ‘Huawen’

华文 huáwén or 华语 huáyǔ is mostly used outside mainland China, like in Hong Kong, Singapore, and Malaysia, where Chinese is the official language or used by most of the population. For example, a child from Malaysia might say: ”I’ve gone to 华文学校 huáwén xuéxiào (Chinese school) since I was little.” 华文 and 华语 are both related to huárén 华人 , a name for the ancient agricultural tribes living along the Yellow River. Now huárén more commonly refers to ethnic Chinese people and their language all over the world.

Have we made things clearer or more complicated now? What word would you use when you are talking to us?

Here’s a map of the Chinese language being used outside of China: