You may be into HSK2 or HSK3, or even further — and wondering about some seemingly very basic questions, yet are a bit afraid to ask. In any case, these are frequent questions in our classes online or in Shanghai, or on Reddit. Actually, most of these questions are a yes and no!

1- Should I learn stroke order?

This answer comes in two parts, but the first part is bigger and more important.

Let’s look at these four characters and their stroke order: 二 (two), 雨 (rain), 家 (home, family), and 爽 (feel good). The character for two only has two strokes, but ‘feel good’ has 12.

All follow the basic principle from top to bottom, drawing the basic structure first before details. This is visible in all these Chinese characters.

Here are some reasons why you should learn basic stroke order, and why it’s worth the time investment in the beginning, and why we focus so much on this in our Hanzi course.

This is why we definitely suggest you learn basic stroke order.

That is for most Chinese language students enough, it doesn’t really matter if you do the tiny details such as the X’s in ‘爽’ in the right order (except perhaps for above stated HSK exams).

2 – Should I memorize all the Pinyin including tones by heart?

‘By heart’ in English means to know something very well, so the answer depends on how you see this. You should know the Chinese tones by memory, because how else will Chinese people understand the difference between words? We know the examples of 睡觉 shuì jiào (sleep) and 水饺 shuǐ jiǎo (dumplings), but these examples make it look like if they’re just a few of these.

But do you know the tones of 北京 and 背景 by heart? Which one is Běijīng and which one is Bèijǐng? Chinese people won’t understand you mean ‘background’ unless you specifically use the correct tones in 背景 (Bèijǐng).

The question is then: how do you learn it?

You could learn all tones from paper: write down words from Pleco and include the tones, and memorize them that way. But we honestly think that’s not the right way to do this. Once you start with HSK5, you’ll have learned over 1200 words, with tens of thousands of tone combinations.

You need to imprint it in your mind or heart or wherever you think language is stored. And you do this by reciting and speaking and speaking and speaking. For this, you can do so many things: immerse yourself by listening to podcasts in Chinese language or watching Chinese movies on Netflix. It’s also great if you allocate some time to repeat the sentences you hear to practice your speaking.

In other words: It’s less important if you don’t know exactly know which tone a word is spoken at, but it’s more important you pronounce it right. Clear and standard pronunciation of your Mandarin language will impress Chinese people when you are talking with them, and it will be more convincing than an HSK certificate to make Chinese people believe that you are a qualified advanced Chinese learner.

3 – Should I learn the meaning of each individual Chinese character?

At GoEast, our learning order is to teach HSK1 and HSK2 before Hanzi characters. Then in the Hanzi course, we go over each character in detail; the meaning of each character. So it helps to know that 报纸 bào zhǐ (newspaper) consists of the two words 报 (report) and 纸 (paper), so that when you get to 纸袋 you at least know what the bag is made of.

Should you learn like this yourself too? Learn the meaning of each individual character?

Yes and no, but more yes than no.

Our advice is: if you see a character over & over again, it makes sense to learn what the character is about. For instance 平级, 平等, 平安, 水平. Here it helps to know that 平 means ‘level’ and ‘flat’ (aside from some other meanings).

When your Chinese goes into intermediate territory, you combine the Hanzi you already know into new combinations, all the time. So when you get more advanced you will start to know the meaning either because you looked it up, or you will develop a somewhat intuitive feel for the meaning.

When reviewing or learning words with the same Hanzi character, can make a mind-map Compare them and figure out the connection. See here the example of 果. This Chinese character means result or fruit. 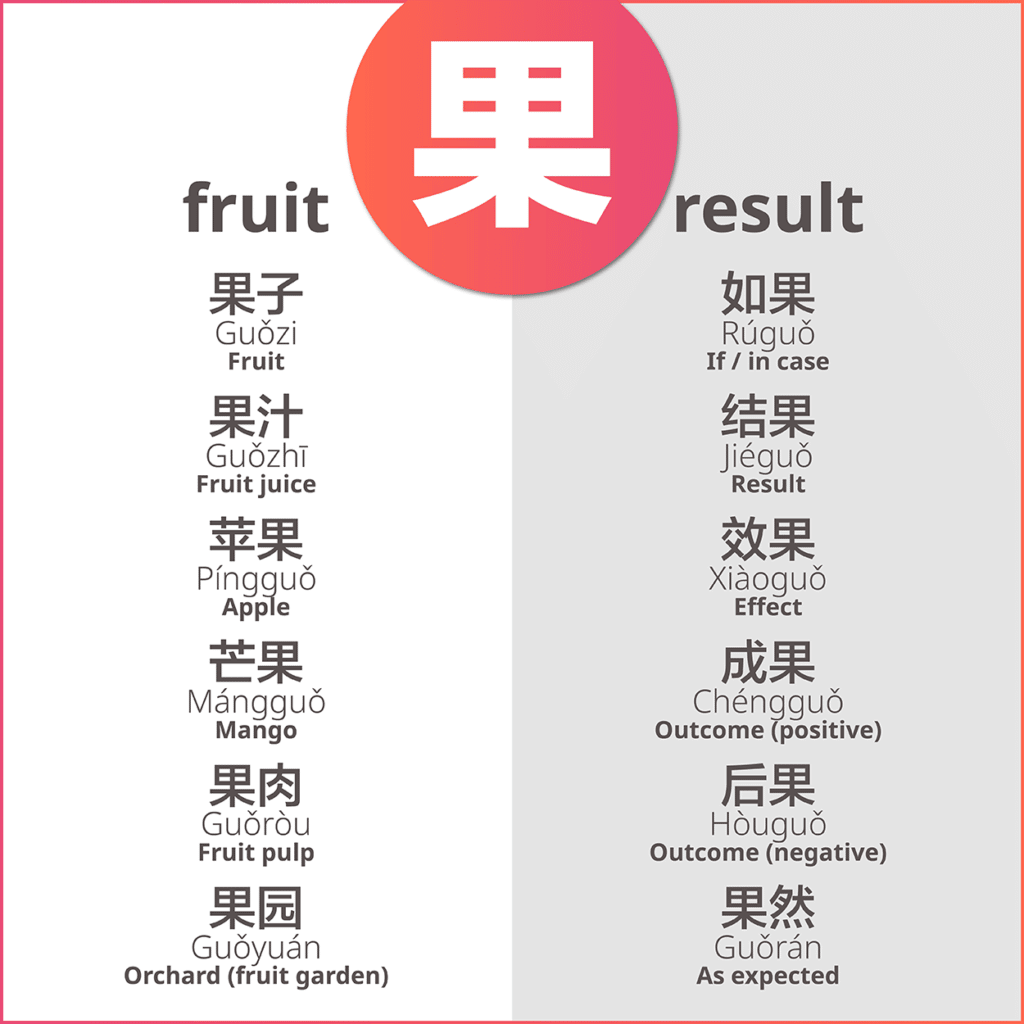 When you have a good command of enough basic Hanzi, you can automatically learn more new words without your Chinese teacher. But equally, you’ll encounter more & more words where ‘splitting’ the characters doesn’t always make sense.

That’s why we think you can choose which words you learn as words, and which you learn as individual characters on top of that.